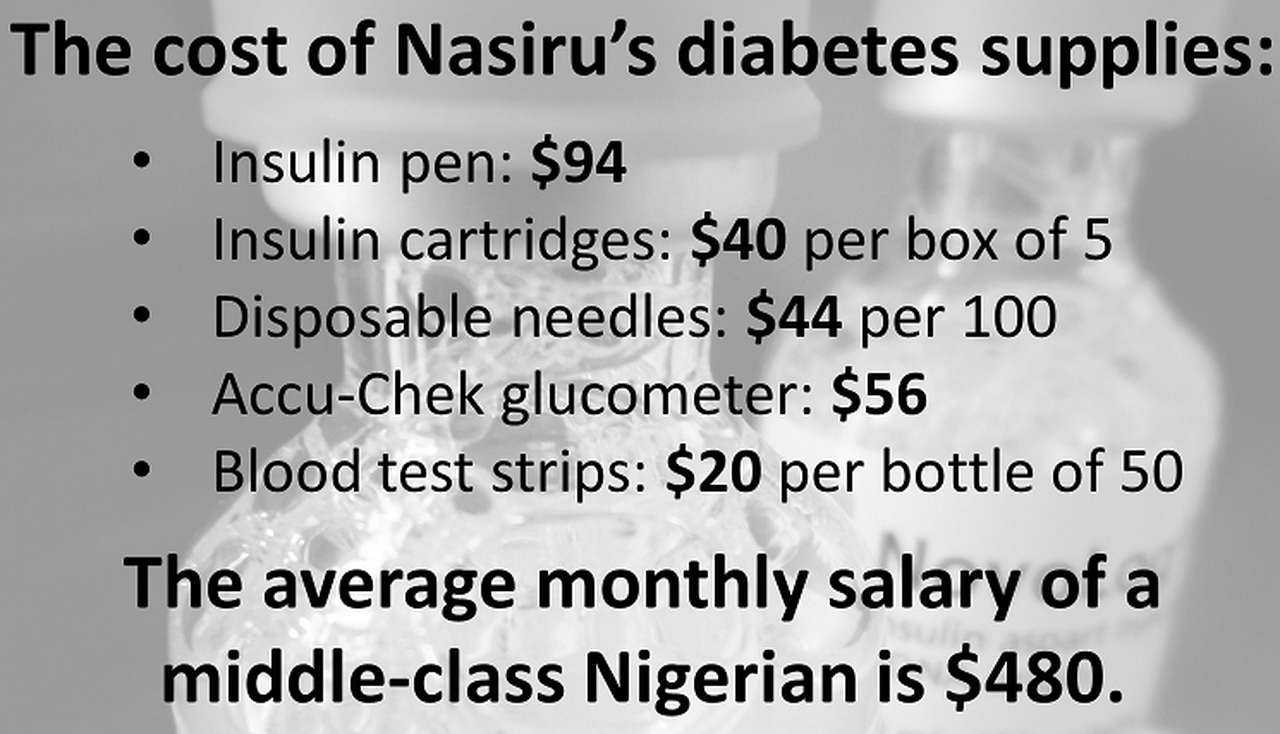 This is a difficult story to share, but it has strong elements of perseverance and hope because the person who shared it with me is living with diabetes in situation that makes every day difficult. I connected with Olafimihan Nasiru a few months ago, thanks to the Nigerian Online Diabetes Community and he offered to share his diabetes story with me.

He deals with similar fears and issues faced by anyone with diabetes, but he – like others around the globe – faces additional challenges that many of us do not have to consider. He expanded on the effects that living with diabetes in Nigeria have had on him. Things are not easy for Nasiru, but he is looking at solutions and supports efforts to connect with others and raise awareness about the problems. He is kind and intelligent and was so willing to answer any questions I had about his diabetes and his life. Thank you, Nasiru, for connecting with me and speaking out. I hope we can all hear and share more stories like this.

I am a young man of 37 years of age, currently unemployed, living in Lagos, south western Nigeria. I have had diabetes for almost 10 years, so I think it is important to share part of my experience.

Growing up, I was relatively healthy in the early part my life, as attending the hospital or seeing a medical doctor was, on the whole, nonexistent. The common cold that I would occasionally have was treated with over-the-counter drugs, like paracetamol, although that fact may also reveal my poor economic background. This period of not going to the doctor actually ranged from my pre- school up to secondary school ages. It was not until I gained admission into university that I had the opportunity of meeting medical doctors at the school medical facilities for treatment of illnesses, like the common cold that is usually associated to academic and physical stress.

However, the end of my university education in August 2004 marked the beginning of a new turn in my personal health. About a month after leaving the school to prepare for the compulsory national service, strange changes started occurring in my body. The noticed changes, though I did not pay serious attention to them, included excessive craving for water and increased frequent urination. The other change was loss of weight. The curiosity of people about my sudden loss of weight prompted me to visit a drug store where I could not get a good explanation. I then visited a neighborhood clinic where I was wrongly diagnosed.

At this point, my condition was getting worse and I decided to visit a government primary health facility. At the hospital I was diagnosed with diabetes mellitus, as my fasting blood sugar test read over 300mg/dl. I was then referred to a secondary health institution where I met a diabetician and was fully diagnosed with type 1 diabetes at the age of 27. I was put on insulin injections at that time. The cause of my diabetes was not understood, though I was told that it could be hereditary, but there is no diabetes in my family history.

Living with diabetes has exposed me to some awful and embarrassing experiences of hypoglycemia, the major side effect of insulin, on several occasions. I have passed out at public places on different occasions before getting rescued at hospitals. And I have had several embarrassing situations in social and work gatherings due to disorientation or confusion. Moreover, depending on insulin has brought a financial burden on me, especially now that I am without work, since it has become necessary for me to secure all the medications and materials I need on my own. Being diabetic has also brought some negative psychological effects on me. For example, I believe my inability to secure a lucrative job is linked to the mental effects of diabetes on me. In addition, my social life is affected seriously, as dining in social gathering is sometime embarrassing, especially when I have to reject some certain foods.

The myths associated to diabetes in Africa, mostly due to ignorance, have not helped encourage me to typically disclose my diabetic status to people. For instance, I have gotten several words of advice ranging from direction to seek a spiritual cure, to a suggestion to abandon my insulin injections, with no logical alternative provided.

Based on my experience, I believe that much is still needed to be done in terms of diabetes education, access to insulin, care etc. to address the problem of diabetes globally, particularly in poor countries.

The cost of Nasiru’s diabetic basic management and supplies are broken down as follows:

I asked Nasiru what impact he has felt because of the exorbitant costs of managing his diabetes. He shared the following list.

When discussing these difficult impacts, Nasiru shared what he thought the main challenges and possible solutions to these issues are.