Putting a Price Tag on Prescriptions

In 2016, the NHS plans to put price tags on prescription medicines that cost more than £20, with the note ‘funded by the UK taxpayer’. This idea has sparked much debate. In July, Health secretary Jeremy Hunt noted, ‘’This will not just reduce waste by reminding people of the cost of medicine, but also improve patient care by boosting adherence to drug regimes.”

Many are against this measure, with concerns that labels on medicines with costs might put patients off and feel like a burden to society, while ‘’…some vulnerable individuals could be encouraged to stop picking up repeat prescriptions.”

There’s another interesting and worrying perspective out there, that ‘’the intention is to encourage healthy people to resent paying for expensive medicines that are taken by the very ill who – they’ll believe – don’t put any money towards it themselves. Hunt is hoping that this will nudge people away from supporting the National Health Service and towards private care, with everybody having to pay for their own healthcare, no matter whether they are able to do so or not.’’ 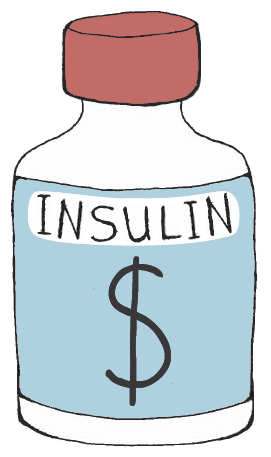 This is alarming for me, as someone who comes from the USA where the costs of my type 1 diabetes insulin and supplies were outrageous, even with a health insurance policy. I am filled with anxiety whenever there are murmurings about the NHS moving towards a more privatised system. We have seen this already beginning to happen. As someone who is beyond grateful for the NHS, something that supports the right to health for people no matter what their financial status, I am very much against moving towards a system more similar to the USA because people go bankrupt when they get sick there. In fact, medical bills are the number one reason that people go bankrupt in the USA.

I don’t know whether the theory that prescription pricing labels is meant to push people to favour privatisation of the NHS has any merit, but if we want to keep our NHS, we need to keep our eyes open and speak out to make sure it stays. It isn’t a perfect system, but it is one that fails far less people than my country of origin’s. The NHS treats everyone as a human being.

On that note, I am personally in support of prices on prescriptions. My reasoning compliments the idea that sharing the cost of drugs with patients is reasonable and makes sense. ‘’It’s information that is known to health professionals and suppliers, so why not share it with the very people who are both funding and consuming the pills?’’

For any reasonable person, this measure should do the opposite of ‘nudging people away from NHS.’ This is not something that should make people feel used or guilty, but it should put them in a better position to appreciate the NHS and the fact that our system does not cause catastrophic debt to individuals. I believe that it can also serve to alert people with type 1 diabetes to the shocking price of insulin, which is basically set at any price of the monopoly’s choosing.

To give you an example, this blog from 2009 notes the cost of diabetes supplies, which has increased since then. A pack of 5 Humalog in the UK costs about £30. This source notes that one bottle of Humalog in the USA costs about $78 (£50). Others around the world tell us that they pay anything from $6 to $60 per bottle of insulin. Clearly this random pricing model is working for the insulin industry, which surpassed $23 billion in profits in 2013 and is estimated to hit 32.24 billion in 2019. But it sure as hell is not working for the humans who must use these medicines and products to survive.

This is especially troubling for our friends around the world because most of them do not have a system like the NHS to fall back on. I already mentioned the USA, but other countries face problems because of poor health infrastructure. In most parts of the world, there is no such thing as ‘free medicine’ for people with type 1 diabetes. When those of us in the UK start to see the cost of not only our insulin, but our test strips and pump supplies on the labels I hope everyone will be outraged that companies can set whatever price they want. Hopefully we will be motivated to speak out and take action.