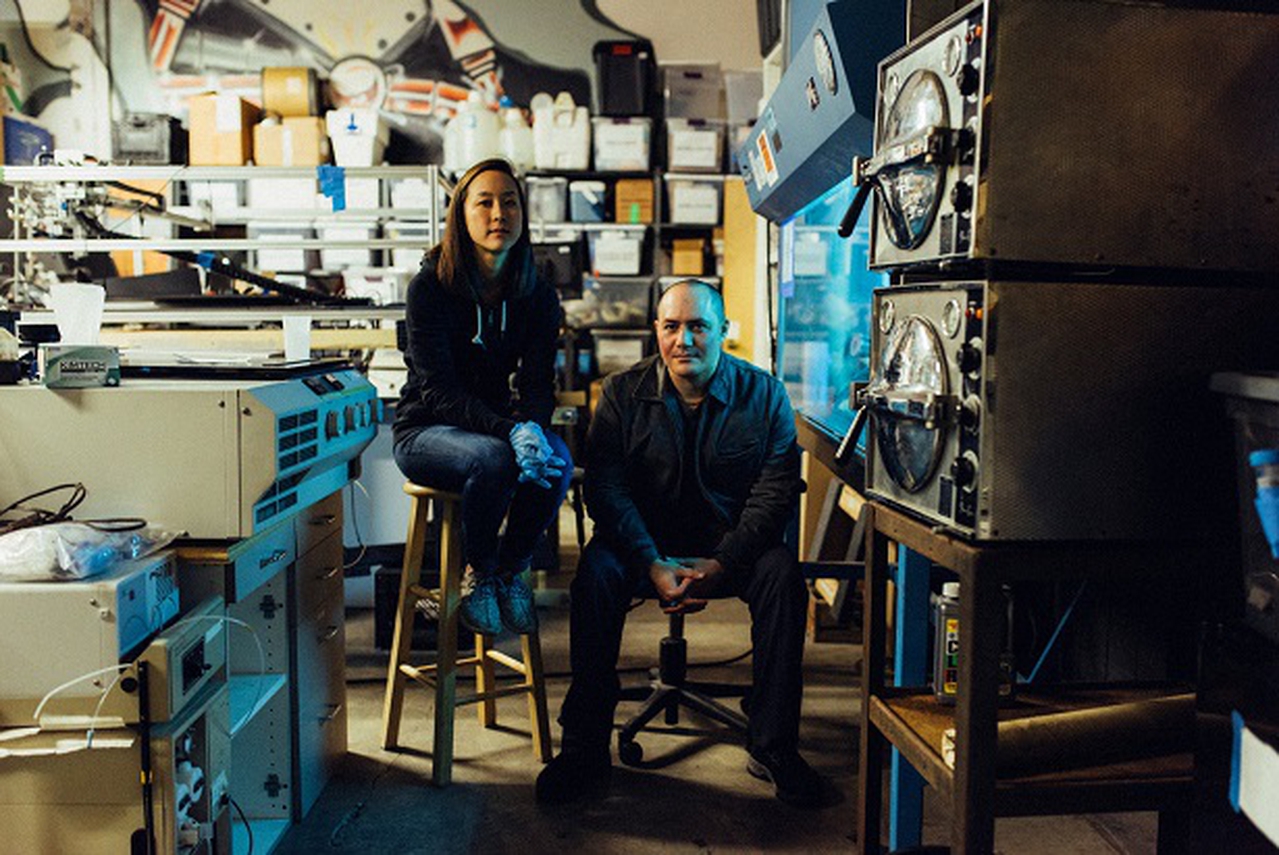 After hearing about a group of ''insulin biohackers'' for the past year, I got in touch with Anthony Di Franco, a member of Counter Culture Labs, a biohacker collective in the USA, and he agreed to do an interview for our blog. Don't worry, Anthony will explain what a biohacker is. He also shares updates from the team and how he envisions their work as a way of eventually making insulin more accessible and available to all who need it worldwide.

For readers who are unfamiliar, what is open source and why is it a good thing when it comes to insulin? What is a biohacker?

Open source is the practice of making all information necessary to reproduce and modify a product publicly available along with the product itself. It started in the software world as an alternative to the practice of providing only machine-readable copies of software, which can’t be understood or changed by users of the software. Without access to human-readable code, users and other stakeholders were shut out of their own tools. Open source methods of production are relevant not just to aligning incentives and improving the economics of software development, but also to scientific reproducibility and transparency. In both software and science, open source can enable more participation and progress than trying to hold secrets close. In medicine in general, and diabetes treatments in particular, I think it holds one of the keys to breaking through the barrier between promising research and a stagnant market of treatments available to patients, just as it made software much more efficient to produce and use.

“Biohacker” derives from the term “hacker” used in the communities of early pioneers of computing. There, and now, in groups that respect their cultural tradition, “hacker” is a term used to refer to people who seek to understand how things work on the inside, instead of just using products as a consumer. Hackers are people who seek to modify things to serve their own purposes, instead of just accepting them as limited to their originally intended purposes. It’s an approach that emphasizes the philosophical concepts of phronesis and techne, which describe an embodied, contextualized, practical approach to things applied to science and technology. Biohackers are people who take a practical approach to understanding and engineering biological systems. They look beyond appearances and inside the black boxes of commercial products to understand the substance and true implications of things.

I’ll also refer you to the definition in the Hacker’s Dictionary, a classic document in the history of the pioneers of software.

Can you tell readers a little bit about Open Insulin and why you decided to start the initiative?

Open Insulin is one of many projects at Counter Culture Labs, a biohacker space in Oakland, California. Counter Culture Labs was founded around 2011-2012 by a group of hackers with diverse backgrounds and interests. Members joined us from Sudo Room, another hacker space in Oakland, and Biocurious, a biohacker space in Sunnyvale. Many were also involved in Occupy Oakland, and wanted to establish a more permanent organization with the same community spirit and values. I became involved both because I shared the desire to build a community-focused institution, and because I have type 1 diabetes myself, which means I live with the frustration of costly and tedious treatment regimens day in and day out. I know how much the standard of care for diabetes patients lags behind what recent research suggests might be possible. So, for my own sake, and for the sake of the others with the condition, I sought to take whatever steps I could to close the gap between the research and what is available to patients on the market right now.

I had previously looked into reducing dependence on disposable supplies with alternative blood glucose sensing and insulin administration technologies, and producing insulin in an automated bioreactor - a device that could automatically grow a culture of an organism modified to produce insulin, and perhaps also extract and purify the insulin. Eventually, we reached a critical mass of knowledge and interest around the idea of starting by producing insulin with a manual protocol, but one designed to be simpler and less expensive than existing methods.

We know that the current insulin market is dominated by three big companies that seem to have a monopoly on insulin production. If you could achieve the creation of open source insulin, what would it mean for the global diabetes community?

It could contribute in at least three ways - first, by making insulin production more economical at a smaller scale, and opening up manufacturing to much more competition, improving cost and access for patients. Second, we hope the protocol could serve as a basis for future research into improvements to insulin - variants that are longer acting, shorter acting, more temperature stable, and so on - that address different concerns that arise in treatment. Third, we hope it might serve as a basis for research and production of other proteins by small groups, and open up participation in research and development to accelerate progress in other aspects of diabetes treatment besides insulin and other areas of science and medicine besides diabetes treatment.

Is there a chance that patent infringement could be an issue with the insulin you are working to create?

Currently we’re working on a novel method to produce human insulin, which is not patented, and as far as I know is not patentable. There are variations on normal human insulin to make them longer or shorter acting, which involve very small changes to the sequence that codes for human insulin. One of those patents just expired, and a generic version of that long-acting variant came to market soon after (a couple weeks after we closed our crowdfunding campaign in fact). The rest of the major patents will be expiring in the next few years, which will open up the way to producing the other major variants for the market. But in any case, patents are no hindrance to research work.

What stage are you at in the development process and what are your plans for the future?

Right now we have been working in the lab for about 8 months, and we are still working towards our first major milestone, the production of proinsulin, which is the precursor to insulin. Once we do that, we can investigate our ideas about simpler ways to make the final active form of insulin out of the proinsulin protein, which may take a few more years. After that, we will assess our findings, and if we do indeed come up with a more economical way to make insulin as we hope, we’ll approach existing generics manufacturers to work on purifying the product to pharmaceutical grade and scaling up or out.

What challenges do you face in these initial stages, and what have you learned so far?

The two main challenges are that we are mostly a group of talented and interested but inexperienced scientists learning challenging lab protocols from scratch, and fitting the work into gaps in our schedules left by work or school, and we are using surplus equipment and reagents that add delays and uncertainties to our work. So progress can be slow and involve a lot of detours on top of those implied by the already uncertain nature of scientific investigation, and we have to dig deep to figure out what to do next when something goes wrong. We learn hard and fast and often and still less that we might like. There’s a lot of practical wisdom around making a protocol published online or in a paper work, and we’re picking up a lot of that the hard way, as we go. Much of the value we hope to provide to the community is documenting as much of this practical wisdom as we can, and perhaps eventually automating the kind of work we’re doing by hand.

Do you foresee or worry about any challenges or roadblocks from pharmaceutical companies specifically if open insulin becomes viable?

From where I stand, I don’t think things will develop quickly enough that they will even notice. The patents are already expiring, which is something they already care about and understand the significance of to their businesses and are focused on responding to. I doubt we will be able to compete for their attention next to that. Our impact will unfold much more slowly, maybe on the scale of a decade, and accompany a lot of other changes to the business environment they’re operating in coming from other sources. We’re a very small part of much bigger changes afoot.

If all goes well, how long would it take for something like this to be available to people with diabetes (including people in resource-poor and lower-income countries)?

It’s hard to say at this point. After the scientific work, which might take a few years, there will be the work of seeking business partnerships and going through more engineering work and the biosimilar approval process in the US. In other areas of the world, it may be simpler, but might also involve more unusual local political considerations. We’re hoping that our work will inspire others to move in parallel alongside us and increase the chances that one group will succeed quickly. There are some preliminary signs that this is happening, which could yield results sooner. But there’s no doubt we’re at the start of a very long and winding road.

Thanks so much for answering these questions, Anthony. We will be rooting for you and your team and keeping and eye on progress. 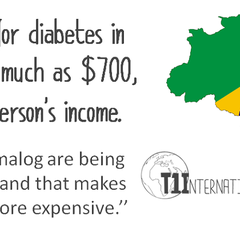 Exorbitant Diabetes Costs Must be Addressed

The WHO has chosen ‘beat diabetes’ as the theme for World Health Day this year, ignoring those who cannot afford or obtain their vital and essential medicines. The theme is insensitive and ignorant to those living with diabetes whose lives are most in jeopardy... Read more