A Parent's Perspective on Struggling with Insulin Costs

I am not insulin dependent. My daughter Hattie has type 1 diabetes, and shares her story of using another person’s insulin. She lives with the condition day in and day out, but I – like so many others – live under the strain of the financial and emotional turmoil caused by the essential need for my family to get and afford insulin.

I stood in a cherished friend’s kitchen one day, arranging fried chicken and salads I had brought for her family, and turned to offer her my strength in a hug as she struggled to comprehend the death of her daughter, taken all too young by complications stemming from cystic fibrosis. She broke the embrace first and, thinking of me and my daughter’s struggle that year, she said, “Before you leave, there are several bottles of insulin in the door of the ‘fridge. Take them for Hattie.”

My family was caught in the margins. We had never been without health insurance. We had always played by the rules. At 58, I’ve never been uninsured. My seven children were never uninsured. My husband was never uninsured. Suddenly, we found ourselves on an ACA plan for our daughter with a high deductible, which meant we had to pay $6,000 – in addition to $2,244 in total monthly premiums – before receiving any benefits from insurance coverage. I had never heard of such a thing. Our prescriptions had never been subject to a deductible before. My husband is retired and I am a teacher. I had no idea how we would sustain this kind of expense. So you can see that the insulin from my friend was a life-saving gift, no matter how much I disliked the path it took getting to us.

I have learned that this exchange between my friend and me, where her daughter’s insulin went to mine, is not an uncommon story. The stuff is just that precious. Not a single drop is to be wasted. In fact, Hattie rationed it so closely that it expired in her pump and she ended up in the ER late one night. Our family have since responded to random calls from complete strangers asking for supplies. If they needed something and we had extras on hand, we helped. For those lucky people that know others living with Type 1 diabetes, this is the way the community is surviving.

We are not in some far off country, down some beaten down road, but right here in the heart of America—Kansas City, Missouri. The situation is not OK anywhere, but I think most people find it especially surprising to hear about it in middle class working families, like mine.

We are days away from the launch of Eli Lilly’s helpline, which promises to help families living this nightmare. I hope it does. However, I am cautious. The pricing deals and scheming between manufacturers, PBMs, and pharmacies is opaque. The diabetes community has been demanding transparency and a solution to the price gouging of patients that has not only been driving up the cost of insulin, but many other prescription drugs as well. Instead of those kinds of solutions, Eli Lilly is rolling out something that will be yet another layer to complicate the process. It will absolutely allow them to keep hiding their extravagant profit making schemes.

Still, I hope it helps a few, because families are otherwise faced with the option of resorting to over the counter $25 insulin from Walmart. Can my daughter survive on it? Yes. I know this because my brother did so. He was diagnosed long before fast acting insulin came along. Those who are ‘old-school diabetics’ can tell you that those insulins are not like the fast and long acting insulin that most people use today. You will need to dose about 45 minutes before eating. You will need to snack, without additional dosing, between meals, because the insulin will keep working long after your meal is gone. The insulin has unreliable peaks, meaning blood sugars are much more unpredictable for most people who use it, and more frequent blood glucose testing is required. Blood glucose testing strips or continuous glucose monitoring are not cheap either.

My brother went low and unconscious twice while driving, wrecking his car twice on that insulin. Luckily no one was hurt. My husband met a family that was not so lucky. They lost a child in a car accident caused by a diabetic that went low while driving. There are reasons we want folks with diabetes to be able to manage their glucose in the best possible way.

My healthy pancreas releases insulin the minute my mouth starts to water as I gaze upon my meal. A person with fast acting insulin in a pen or pump can achieve close to the same thing. Can’t we agree that helping the body perform at its best is what is most desirable for everyone? When I explained this to a friend today, she immediately got it. She said, “So opting for the cheaper insulin is like telling some people they can’t afford the clean water, but ‘Here’s the dirty water that will keep you alive. It might make you sick some days, but you’ll stay alive.’” For someone who didn’t know a thing about diabetes 10 minutes before that, she’s quick. If we can get others to realize this and ensure equal and affordable access for all, maybe there’s hope. 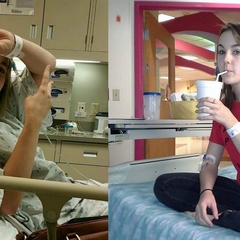 I carry a machine everywhere I go. Not a phone, or a tablet, or an iPod – it’s an insulin pump. It’s connected to my body with a tiny cannula that rests under my skin, pumping a fluid through 23” of tubing. I would die without it. Read more