The crisis in Syria has torn the country apart. According to the UN special envoy for Syria, an estimated 400,000 people have been killed in the past five years of civil war. We have also seen and read about thousands more deaths among those trying to cross the Mediterranean to safety.

We know that war and violence damages people’s lives in unspeakable ways by taking away basic things like shelter, food and other necessities. On top of those terrors, imagine if you were living with 1 diabetes in Syria and required regular access to insulin and diabetes supplies for survival? I become anxious when I run low on test strips to check my blood sugar level for fear of not having the ability to immediately see if I need to take more insulin to bring my blood sugar down or need to eat something to bring my blood sugar up. I can only imagine facing the horrors of war and the horrors of diabetes without supplies at the same time, but people with diabetes affected by the Syrian crisis are in grave danger because they can no longer access their medicine.

Back in 2013, the Syrian health system was already in a state of emergency because of the continued fighting and carnage. There were reports of widespread looting of healthcare facilities, warehouses and offices, interfering with existing treatment of patients. The World Health Organization reported that 36% of the country’s public hospitals are out of service with 57% damaged.

Recently, the WHO noted that less than 50% of hospitals appear to be fully functioning. This is because buildings have been so severely damaged, doctors have fled the country, and equipment and medicine is becoming increasingly scarce. The Syrian American Medical Society notes specifically that in Aleppo, a city of more than 3 million people, only 300 physicians have stayed. This includes only 16 surgeons and 3 orthopedic surgeons. They also said that, “SAMS has estimated that AT LEAST 200,000 citizens have died due to non-communicable chronic diseases (NCD).” That includes, of course, many people living with Type 1 diabetes.

T1International is working with the Syrian American Medical Society to address the needs of Syrians with diabetes. They have told us that there are thousands of people in Syria in urgent need of insulin. It is important that we remember how similar these people are to us. They all have diabetes and they all have stories — like a mother who is struggling to find insulin that is not expired for her son. She told us that even when they are able to get insulin, Novolog can cost $45 and Lantus can cost $90. Keeping the insulin cold is almost impossible with the power cuts and bombing. One pot of test strips costs $59, if they can find them at all.

Another woman with Type 1 diabetes in Syria works in the only functioning pharmacy in her area. In order to get insulin for herself and other patients she must drive about four hours every month. Insulin and supplies can only be picked up one month at a time because of the extremely limited supply. She and the others with Type 1 diabetes must always live in fear that there will not be anything the next month, or that violence will get in the way of their vital access to insulin.

She told us the following story: “One day, the power went off due to the shell bombing in Deir Azzour, and the city became under very strict siege. It was time for me to travel to get the insulin supplies, but I could not leave because it was so risky. A week later the road became safer, but due to the lack of insulin I was very sick so I could not travel to get the supply, but a friend of mine did.

Unfortunately for some, this happened too late. During the week without the insulin supplies a 7-year-old boy died due to severe DKA. However, we were able to save a 14 year old girl’s life with the insulin my friend brought back. I wish we had had enough supplies for an extra week to save that boy’s life.’’

We were also contacted by a man from Syria who has a son with Type 1 diabetes. He wishes to remain anonymous for safety reasons, but he told us, “For us to secure the most basic necessities of life is becoming extremely difficult with a small child suffering from diabetes. I tried to run away towards Europe, but did not have the courage to risk taking my family in the sea after I saw pictures of children who drowned in the sea. We are trying to keep alive, but of all things I wish that my son could live like other children.”

The above stories are just a taste of thousands more traumatic stories of Syrians affected by diabetes and war. T1International carried out the ‘Insulin for Syrians’ appeal to help ensure these families get their life-saving insulin and diabetes supplies.

All funds raised through this appeal went towards insulin, syringes, and blood glucose monitoring supplies for people in Aleppo and other locations in Syria that have been cut off from aid. You can read more about the appeal and results here. 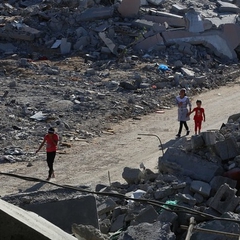 No Blood Glucose Testing in Gaza

"We live in a dangerous area, so it's hard to be in a good mood. There are wars, so I always trying not to be scared when I hear bombs." – Deema, living with type 1 diabetes in Gaza Read more 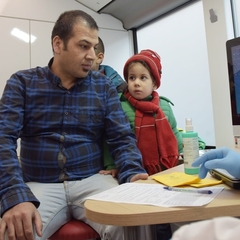