T1International has been made aware of a recent increase in hateful speech, as well as disrespectful and non-collaborative behavior on the #insulin4all hashtag. While hashtags cannot be owned by anyone, T1International’s global work is tied to #insulin4all. As one of the creators of the hashtag, we want to acknowledge our concerns over these issues and set clear lines about what we stand for as an organization, and what we do not. We do not stand for or tolerate bullying, hate speech, abusive language, or words or actions that are intended to demoralize others.

The History of #insulin4all
The #insulin4all campaign was launched in the lead up to World Diabetes Day in 2014 by T1International and other organizations. Although World Diabetes Day began in 1991 in order to “draw attention to issues of paramount importance to the diabetes world”, the organizations felt that the true spirit of the day had been lost. The campaign was an effort to emphasize that people living with diabetes struggle to survive or face extreme difficulties because they cannot afford or access their life-saving insulin, blood glucose test strips, or basic healthcare. Others are caught in conflict or living in countries where there is little humanitarian assistance for people with diabetes. Many suffer complications and premature death without affordable or sustainable access.

The #insulin4all hashtag caught on quickly, and, in many ways it took on a life of its own. Advocates across the globe use the hashtag on various online platforms and in-person as a rallying cry to support their efforts to improve the lives of people with diabetes.

T1International’s #insulin4all Chapters
T1International’s USA Chapters and some of our Global Chapters have #insulin4all in their names, which reflects the grassroots nature of the movement and the volunteer efforts, though the Chapters are supported by the T1International Team. All Chapter Leaders and Leads sign an agreement to abide by our policies and values. Through this agreement, they are specifically required to act in a way that is respectful and that represents T1International in a professional manner, honouring T1International’s values and upholding the charity’s reputation. Chapter Leaders and Leads are also provided with guidance and tools for engaging in-person and digitally in ways that reflect the respectful, inclusive, and intersectional movement that we are collectively building.

What #insulin4all Means to T1International
T1International sees #insulin4all as a community-led effort that is not solely focused on one person, entity, or country, but is a collaborative effort to bring equality to all people living with diabetes. This involves not only a fight for equality through affordable access to insulin, supplies and healthcare, but equity and inclusion when it comes to people with all types of diabetes, from all socioeconomic backgrounds, races and ethnicities, gender identities, countries of origin, and more. There is a lot of work to be done, and we believe in doing that work together wherever possible. We believe in doing it respectfully, transparently, and in a way that upholds our values.

The #insulin4all movement has built significant power, and there is a great need to use that power responsibly to advance the cause. When that collective power is focused on those responsible for the problem that have the power to fix it - that means Eli Lilly, Novo Nordisk, and Sanofi, along with other actors that want to profit on insulin even if it means people die because of its price - it is unifying for the community, and serves as a force for driving change.

When that power is focused on people who aren't in a position to make change themselves as individuals - and especially when that focus intersects with other sources of power like white privilege, economic privilege, hetero/cis privilege, and other types of privilege - it ends up being a source of division and moves us further from our end goal of affordable insulin. Holding the Big Three and their executives accountable is categorically different from attacking individuals who aren't in positions of power.

What #insulin4all Does Not Mean to T1International
As a small team of staff that are deeply committed to the values outlined, it pains us to see the hashtag and, thus, the affiliation with T1International’s name being used in harmful ways. It is worth reiterating: we do not stand for or tolerate bullying, hate speech, abusive language, or words or actions that are intended to demoralize others. Using the #insulin4all hashtag to attack people of color, members of the LGBTQ+ community, any marginalized group - or any person or group for that matter - is actively harmful to the movement. We do not believe in meeting problematic behavior with problematic behavior. We believe in calling out unhealthy or damaging behaviors - like the pharmaceutical industry’s price-gouging - in ways that are bold and that ignite change to improve the lives of patients, but are not vicious.

We hope that the #insulin4all community, and whatever it means to each member of that community, can come together over the shared aim of improving the lives of people with diabetes, starting with making insulin affordable and accessible to everyone who needs it. As the fight continues, we ask that our volunteers and supporters approach these issues with the same outstanding passion and commitment we see every day, while being open-minded and respectful in their approach. 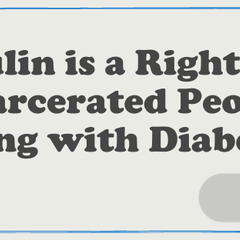 It is time to recognize that incarcerated people with diabetes are particularly vulnerable to insulin insecurity. #insulin4all is more than a hashtag: It is a rallying call to everyone impacted by insulin inaccessibility, and a mournful cry for all who have lost their lives while insulin remains clearly in view, but cruelly out of reach. It’s a demand for justice for everyone who needs insulin to survive, including incarcerated people with diabetes. We must find ways to meaningfully include and involve this population in our activism. Read more 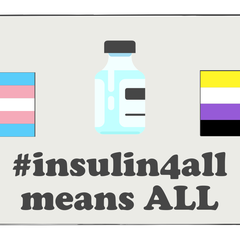 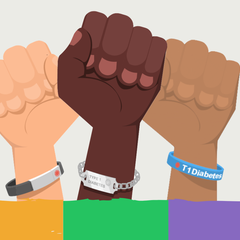