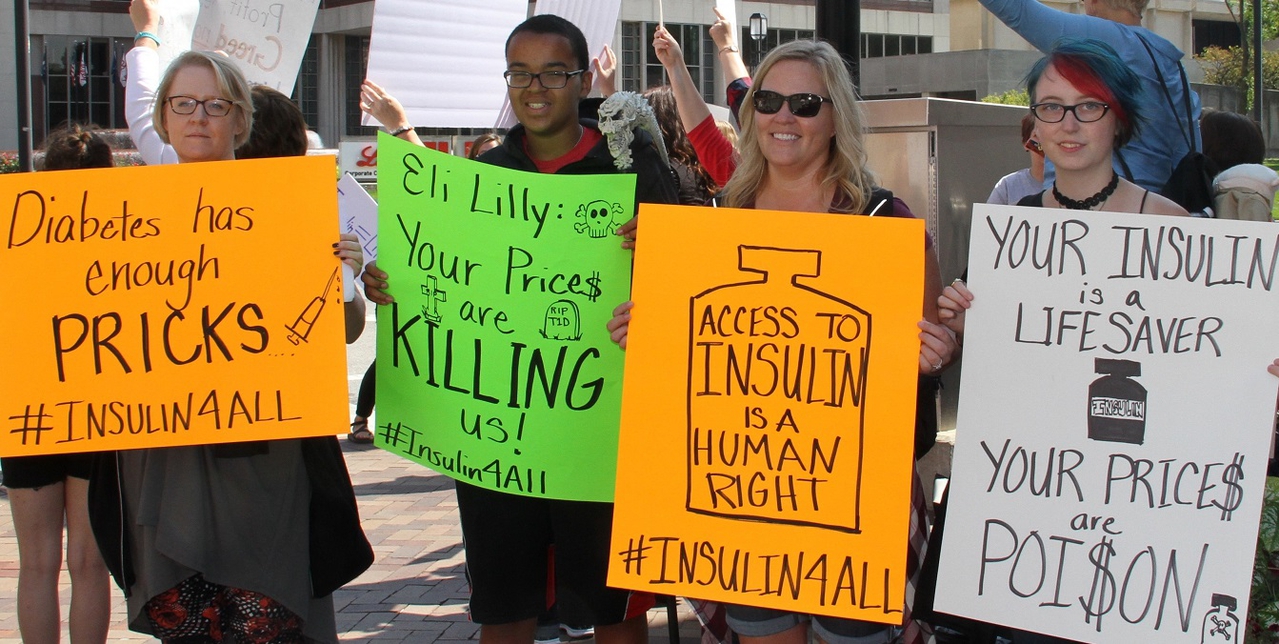 A little over a year ago I was in my own world, helping my son live and thrive with Type 1 Diabetes (T1D). A Twitter user, I began to watch with interest and concern as there was discussion surrounding repeal of the Affordable Care Act (ACA) and the protections for people with pre-existing conditions. I also began to see a common hashtag popping up (#insulin4all), and my bubble was opened to the struggles people were facing due to skyrocketing insulin prices. Before my son’s T1D diagnosis I never had to be concerned about insurance or the expenses of a chronic illness, nor did I worry that I couldn’t afford his life-saving insulin. Suddenly I could see into his future and as a mother, what I saw was terrifying. I watched with interest about a demonstration that would take place at Eli Lilly and decided to travel to Indianapolis and join the T1International demonstration for #insulin4all.

I consider myself an introvert and not one to draw attention to myself, and I generally tend to be neutral on most issues. Raised in a conservative state with a conservative family, a protest/demonstration was definitely out of my comfort zone and not something I had ever considered doing. So why did I attend? I took a stand because I saw my son’s future threatened, simply because his life depends upon a 20-year-old medication that has increased more than 1000% in price, making it unaffordable for many. I took a stand because I do not want to experience Nicole Smith-Holt’s tragedy of losing her son to the high price of insulin. I knew I had to do something.

I could not be more pleased with my experience at last year’s #insulin4all demonstration. I met so many wonderful advocates who joined me in asking for insulin pricing transparency. I now consider many of them close friends. Because of my participation I am now part of KOI#insulin4all, a grassroots volunteer advocacy group asking for insulin pricing transparency in Kentucky, Ohio, and Indiana. What began last year as “Should I go?” has become “I wouldn’t miss it!”. I invite you to join us this year in taking a stand.

Who should join us?

--People who live with Type 1 or Type 2 diabetes and require insulin to live. Even if your insulin is affordable with insurance (as my son’s is) you should come. A simple change in circumstances could have you paying over $300 per vial and having to decide whether you should pay for housing and food or pay for your insulin.

--People who love someone with Type 1 or Type 2 diabetes who requires insulin to live. We need your voice too. Many who cannot afford insulin are fighting hard to survive each day. They need our voices.

--Physicians, nurses, and other healthcare providers who frequently see patients struggling with their insulin costs, in DKA or dealing with complications because they were rationing or have gone without insulin.

--Pharmacists who witness people struggling to pay for their insulin and having to decide between living expenses and their life-saving insulin.

--Concerned citizens or legislators who want to help us raise our voices for affordable insulin.

Why should you join us?

We need to raise our collective voices because PEOPLE ARE DYING. High insulin prices are literally killing people with diabetes. Insulin is like oxygen for someone with T1D. Without it, most will die in 2-3 days. Rationing insulin leads to Diabetic Ketoacidosis (DKA) and other serious complications. If you choose any reason as to why you should join us at the #insulin4all demonstration, let it be this one.

Big Pharma will ignore us until they can’t anymore, and that time is now. The #insulin4all movement and disgust over outrageous insulin pricing is growing, with much coverage in the mainstream media, including NPR and the Today Show. Join us and show that our numbers are large and that we will keep making noise until things change.

Attending the demonstration will also help you and others see that none of us are alone in this struggle. I felt so empowered last year knowing that there are many others who are fighting for #insulin4all. As a citizen of the United States you have the right to peaceful protest. At the #insulin4all demonstration you will be warmly welcomed by passionate advocates who want to save lives and make a difference.

I highly recommend that you join us at this year’s #insulin4all demonstration on Sunday, September 30, 2018 at Eli Lilly in Indianapolis, led by T1International and co-sponsored by People of Faith for Access to Medicines. More information and a registration link can be found here. If you live in the Cincinnati tri-state area consider taking the KOI#insulin4all bus to the demonstration. Signup and information can be found here.

Other ways to support

Can’t take part in the #insulin4all demonstration but still want to be involved? Here are some suggestions on how you can make a difference:

Every action, no matter how big or small, helps us in our mission to achieve #insulin4all.