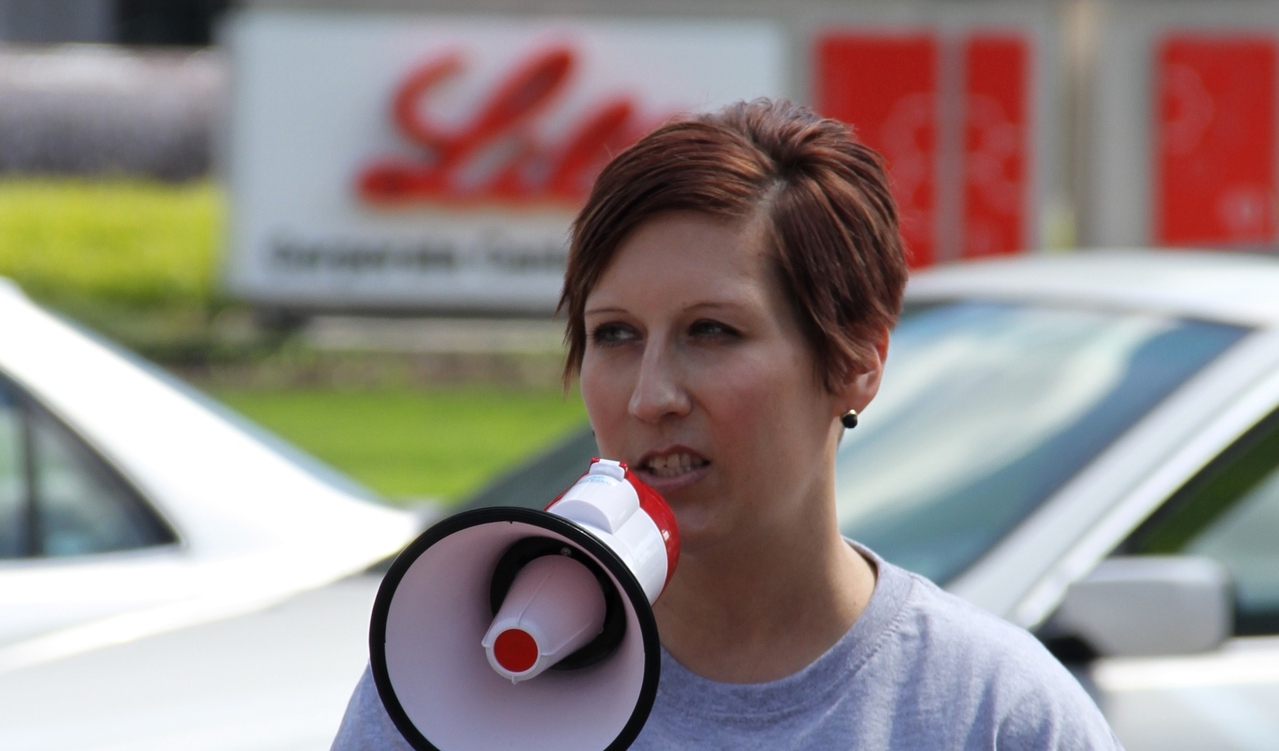 On Saturday, September 9th, I joined dozens of people impacted by the rising cost of insulin in the USA. Thanks to organizers T1International and PFAM, we gathered in protest of those prices in front of Eli Lilly headquarters in Indianapolis, Indiana.

This was my first time attending this type of protest, so I was a bit nervous. However, I quickly felt connected to the entire group in that we had all felt the same emotional and physical impact of rising insulin costs. Others had travelled many hours to join the protest, but one thing was made clear, we wanted to ensure that Eli Lilly heard our voices. We were passionate in our outcry for change and jointly understood that not saying anything is simply not an option.

As a spokesperson for the event, I offered to not only speak to the media, but to be one of three speakers to publicly describe my own unique experiences with rising costs and the impacts of those costs to my life.

One of those stories shook me to my core. Advocate and spokesperson Karyn Wofford shared a statement from a mother who lost her 26 year old son, Alec, because he was not able to afford the insulin he needed to stay alive. Hearing about her attempts to search for information about insurance plans for her son, who was forced off her plan when he turned 26, and the restrictions still placed on people with diabetes in the current insurance market, put me in tears. It was so emotional for me because I have lived these exact same frustrations as a person with type 1 diabetes.

When I went through my first lay-off as an airline employee with type 1 diabetes, I realized quickly that I was going to be forced to pay expensive insurance payments to continue the good coverage I had at the time of the lay-off so that I could afford my insulin and supplies. I applied for every assistance program recommended to me through my physician and the local Health Department. I was denied access to all of those programs because they used my income until that point as a reason to cite that I could not benefit from the programs.

In 2001, those with chronic illnesses like type 1 diabetes were not allowed to shop for insurance plans in the marketplace due to required “waiting periods” for those with pre-existing conditions. One of the phrases that I heard in 2001, and continue to hear from those with diabetes who can’t afford their insulin, is “Go to the ER when you run out of insulin and your blood sugar is high because only then can you not be refused treatment”. Having to wait until we are near death to receive treatment is simply not American to me.

''We will not stop raising our collective voices until we see action.''

Our asks for Eli Lilly, along with Sanofi and Novo Nordisk, to disclose costs associated in making a single vial of insulin, and the profits made from each vial, must be continued. We need more transparency, but also more representation of this issue in Congress and in the public view. My hope is that our grassroots movement will grow and intensify to the point where our representatives have to listen to us and demand action.

The experience of joining others with type 1 diabetes outside of Eli Lilly who share the same frustrations, fight the same battles, and shed the same tears for the same reasons inspired me to connect with as many people in my state as possible. I believe that together, we can be a stronger voice asking our government to do something about high prices, like introducing legislation similar to Nevada’s SB 265, which requires transparency for insulin prices.

One of the other impacts that I saw from this event was how social media was used to take our stories and get them in front of our representatives within minutes of us speaking. After years of not being able to take a public stand due to continued conflicts with my work schedule, it was so meaningful for my own voice to finally be heard. I was honored to share a small part of my own story, and to stand with my new friends in the diabetes community to put a public face to those fighting to stay alive as costs of insulin continue to be out of reach.

After standing together at the demonstration, we know that we are not alone, and we will not stop raising our collective voices until we see action from the insulin makers themselves, from continued legislative efforts, or combined efforts from both.

To view an archived stream of the event, click here.

I could not be more pleased with my experience at last year’s #insulin4all demonstration. I met so many wonderful advocates who joined me in asking for insulin pricing transparency. I now consider many of them close friends. Because of my participation I am now part of KOI#insulin4all, a grassroots volunteer advocacy group asking for insulin pricing transparency in Kentucky, Ohio, and Indiana. What began last year as a “Should I go?” this year has become “I wouldn’t miss it!”. I invite you to join us this year in taking a stand. Read more