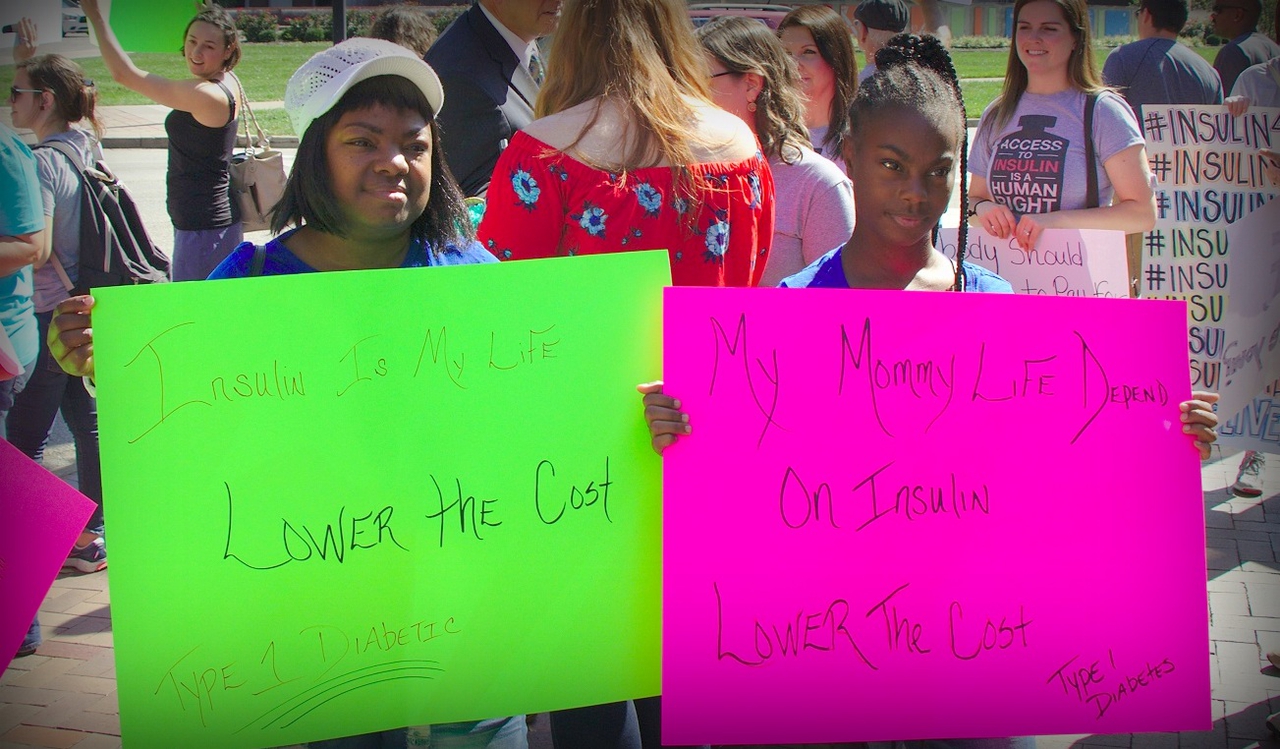 I was diagnosed with type 1 diabetes in May of 1993 at the age of 11. Before coming to the T1International #insulin4all demonstration outside Eli Lilly, I felt alone. I felt like I was battling diabetes by myself. I knew there were others out there with type 1, but it was difficult for me to find them. I also face the type 2 diabetes stereotypes that the world puts on us like ‘‘just eat healthy and lose weight’’ or ‘‘take diabetes pills.’’ I was exhausted by the true reality of having to calculate carbohydrates and check my blood sugar seven times a day and then give myself insulin four or more times a day.

Growing up with diabetes, I was always in the hospital from DKA and I was always told that I would never be able to have children. I have struggled to pay for my insulin many times. I have had to share insulin with my best friend because mine got stolen or I ran out and didn’t have enough money to get more. Sometimes my insurance won’t cover more insulin until a certain date, so there is always stress.

I was able to have children and my daughter, Heaven, often talks about how she can’t wait to get a job so that she can help me cover the cost of my medication. My youngest son is always checking on me to make sure I am okay. When it is time to take my medication he says, ‘‘Mommy, here go your life.’’ He is talking about my insulin. When my oldest son, who is 12, went to school and told his friend that if I didn't have insulin I would die, he wanted to start raising money so that he can give it to me to help me afford my insulin. As you can see, my kids are my life.

Going to Eli Lilly with my daughter was a first for both of us. It was our first protest and I was excited to be part of it. My daughter was excited to support me but she said she was also nervous. Throughout the protest, she was thinking about how we were protesting for something that may take years to accomplish and it might be too late for many people whose lives depend on insulin, like mine. There are many people who can’t afford their insulin so they limit themselves from doing things because that money has to go towards insulin just to survive. It is scary knowing that many people have lost their lives because the cost of insulin is too high and they can’t afford it. We know that the fight is worthwhile, but like so many people at the protest, we are angry and scared that the situation is this way.

Coming to the event made me proud because it is one thing to support the cause to lower the cost of insulin in the comfort of my home, and a whole other thing to make signs and support it in public. It was powerful to see the issues that define me highlighted for the whole protest, and it meant a lot to stand together with others who are going through what I'm going through – who are protesting for the same cause I'm protesting for – and to represent a movement.

Heaven and I plan to stay involved with this cause and support local projects and actions. I will keep sharing my story, spreading the word about diabetes and getting people involved. Until we succeed in ensuring a lower price for insulin that everyone can afford, I will work on finding ways to help those who can’t afford their insulin now. My daughter has a group on Facebook called Heaven and Krystal’s Blessing that donates supplies to the homeless, and we plan to expand it to people with diabetes in the Cincinnati area. We want to spread the word not just in Cincinnati, but more widely so that we can make change.

The whole experience of the demonstration showed me that I am not alone. My voice was heard. My daughter said throughout the day that she met great people. She also networked and built relationships with others who are supporting family members or close friends with diabetes, just as she supports me, and it showed her that we are all going through this battle together. We all have voices that matter.