Let me just say now that I'm not going to sugar coat this story. When I first met my sister-in-law, Meaghan, she was working for a fire department as an EMT. She was funny, honest, direct, clever, intimidating, headstrong, kind, sweet, and a protector of her family. When she was working to be a phlebotomist she would look at your veins and comment on good ones. Her later choice to become a nurse was exactly right.

Meaghan was diagnosed with type 1 diabetes in 2000. In June of 2018 we got a phone call from Meaghan saying she had lost her job and insurance. She was down to thirty units of insulin in her pump (thirty units would not last her a day). I told her to come on over we would figure it out. I gave her a list of resources. Meaghan made too much money to qualify for financial assistance, and sample insulin from her doctor wasn't as readily available any more. The last thing I wrote on the piece of paper was that there was $25 insulin you can buy at Wal-Mart. I explained it would be necessary to have help from a doctor to get the dosage right since it is an outdated form of treatment. It is unpredictable and requires extra vigilance and blood testing. I kept closely in touch for a couple of weeks to see how she was doing. She assured me she was fine.

The perfect storm does not warn you that it will be different than any other you have weathered. On top of her other worries, the company that produced the insulin pump Meaghan was using had recently gone out of business. Without a job or insurance, it was impossible to purchase supplies, much less a different pump. At the time, Meaghan had two short term jobs but had not had them long enough to get insurance. She had another job lined up to start the week after Christmas and she would have been okay.

She was able to see her family physician before that tough Christmas period on October 29th. They talked about job prospects, insurance, and pumps. Her A1c was disturbingly high. She had an upper respiratory infection. She had been rationing her insulin. Meaghan's doctor's office called her on December 7th and left a message to see if they could help more with her diabetes. She never called back.

From what we can piece together, Meaghan purchased NPH (Walmart insulin) on the 20th of December. We think she put it into her pump and we know she did not get help from her doctor. On December 24th she got a speeding ticket on her way to get things ready at her new job. That evening she talked with her best friend, Kelly, to finalize plans for Christmas. Meaghan was excited and was looking forward to spending the day with Kelly and her family. Meaghan also talked to her Mom.

That night Meaghan started getting sick and vomiting. On Christmas morning Meaghan and Cookie, her roommate, discussed Meaghan going to the hospital. They thought she had the flu. Meaghan refused to go and Cookie went to work sometime around 1:30pm. When Cookie came home late that evening she thought Meaghan was asleep on the couch and she went to bed. The next morning when Cookie got up, Meaghan was in the same position and she was blue. The blankets were undisturbed. Meaghan had died from DKA, from her heart giving out, from diabetes. What she really died from was the inability to get the help she needed in a society that blames people with diabetes for their disease. A perfect storm – but one that is becoming all too common in the USA.

People with type 1 diabetes typically use more than one vial a month. When Meaghan was diagnosed in 2000, she could get one vial of her insulin for around $30. At the time of her death, that same single vial of insulin costs more like $300 to $400. And the cost keeps going up. A nightmare for people with diabetes. A deluge of earnings for the pharmaceutical companies.

When Meaghan struggled to get insulin at other times in her life, her doctor would have had samples available. That is no longer the case at many physicians’ offices. So she had no other option but to purchase what she could, an outdated medicine available inexpensively over the counter. It is not reliable if you are not educated about its impact on your body or can’t afford the other tools to make it work.

After her death, Meaghan had no insulin in her fridge, no ketone sticks, and only half a vial of blood glucose strips. Maybe she could have asked her parents for money. There were other friends and family that gladly would have opened their pocketbooks, tapped their resources or reached out to community to keep her alive. But it is a lot easier to ask for $30 than $300.

Meaghan believed she was fine and would be okay. Her paycheck of $2000 was direct deposited into her account on December 26th, the day after she died. She just needed to wait a day and she could have purchased her prescribed insulin on her own. Just one day. That day – and the extortionate cost of insulin – cost Meaghan her life. 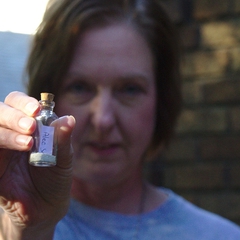